Bullycide is a term used when suicide follows bullying or cyberbullying

Some incidents of suicide have been broadcast over the Internet. Amanda Todd, you teen from Canada, took her own life after a few troubling years of bullying and cyberbullying, followed by sextortion. Wherever our founder Parry Aftab went around the world, teens knew her name. Most had watched the video she delivered on YouTube. Then, when they heard of her death, they felt that they knew her and had lost someone important to then.

But Amanda wasn’t the first nor the last young person to take their own life in connection with something that happened online. Here’s a link to her own video about her bullying and torment.
https://youtu.be/FgDS00bXfyQ 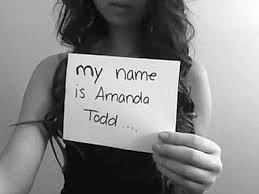 It is a tragic story

Rehtaeh Parson’s death came after she was date-raped after being given straight vodka. One of the four boys involved took pictures while she was being raped. She tried to get the pictures taken down, but when that didn’t work, she took her own life rather than face continued humiliation.

Check out Parry’s answers to your bullycide questions.

What Did You Learn?